We love wood. There’s something even more alluring about the idea of what we call tonewood — wood species that seem naturally musically inclined, just like some people. But what is tonewood anyway? It’s just a way to describe wood species with attributes that are somehow well-suited for acoustic instruments.

If you’re reading this, you probably know that acoustic guitars are made from a combination of different woods, each of which plays a contributing role in articulating its voice. If we limit it to the guitar body itself, think of the tandem relationship between the top, or its much cooler musical moniker, the soundboard, and the back and sides (both comprised of the same wood). 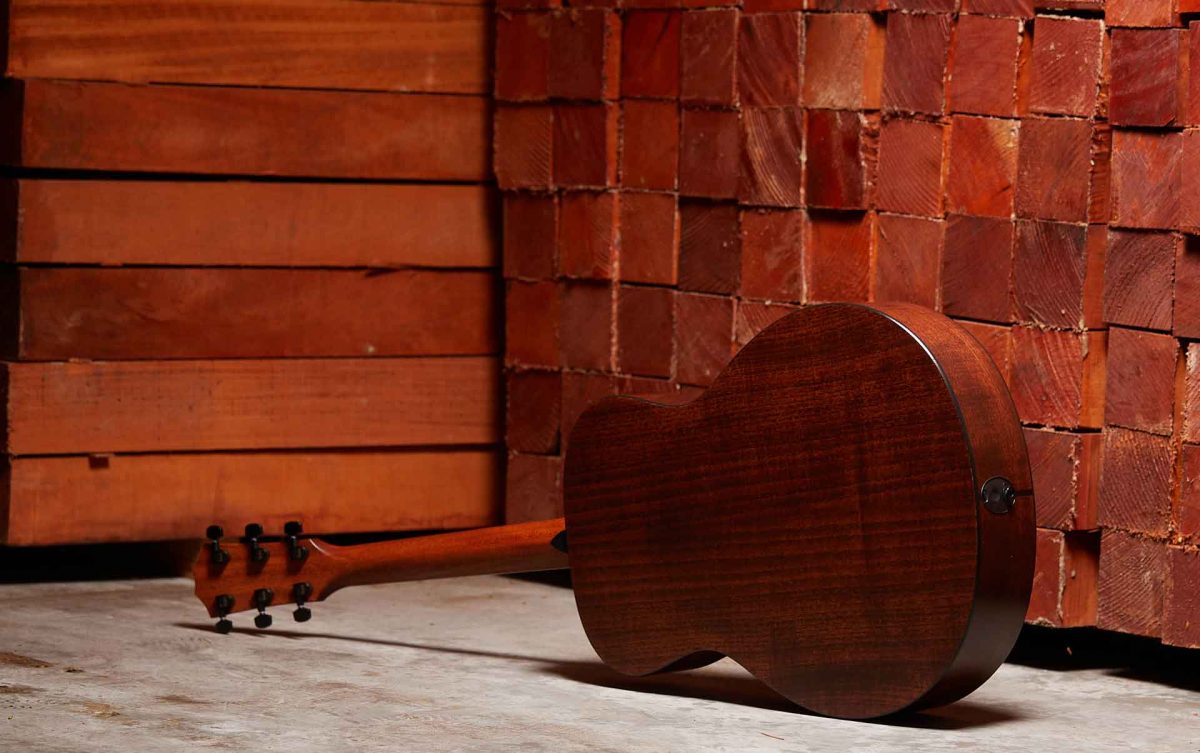 For tops, we frequently use softwoods, such as spruce or cedar, which come from coniferous trees. They tend to have a winning combination of being lightweight yet stiff and strong, possessing an elastic quality that allows them to be set in motion easily. And that’s an important part of their job, because they harness the energy of vibrating strings to move the air inside the guitar body. These woods generally produce a wide dynamic range.

Sometimes we use hardwoods such as mahogany or koa as guitar tops. These denser materials require more energy to set in motion, and the vibration tends to move more gradually through them. The result is a kind of natural compression effect that rounds out the guitar’s initial attack, producing a focused voice with fewer overtones.

For the back and sides, hardwoods are always used. They essentially form the speaker cabinet of the shapely acoustic “box,” helping to naturally flavor and amplify the tone based on their own unique acoustic characteristics. The thing is, describing the inherent sonic identity of each wood species we use can feel a bit reductive because we never hear that particular wood in isolation — it needs to interact with other components, including one of the most influential ones: you. So in some ways, describing the sound of a tonewood is kind of like describing the flavor of a spice — yes, it has a distinct identity, but it works its magic based on the role it plays in a larger recipe, determined by the chef (or in our case, luthier). And sometimes the effort to simplify a wood’s sonic properties can lead to misunderstanding or overgeneralization.

That said, we love exploring the world of woods with guitar enthusiasts in the hope of shedding light on their natural musical flavors and how they contribute to a guitar’s sound. If nothing else, this will give you some food for thought when you play and listen to different guitars. And the more you do that, the more you’ll enrich your own musical palette and come to appreciate the nuances that distinguish guitars made with different woods. It’s a pretty fun exercise, if we do say so ourselves.

This year, we asked Taylor master builder Andy Powers to highlight the properties he thinks matter most in considering the tonewoods used for a guitar. Or as he described it, “the characteristics that directly relate to a player’s experience with the guitar.” He picked four categories, each of which covers a sonic spectrum. Then we asked him to use those to sketch out a sonic profile for each tonewood. These are not in order of importance.

Think of an EQ curve. We often describe a wood’s sonic attributes in terms of its tendencies to resonate in a certain frequency range (i.e., accentuating lows, mids or highs). For example, rosewood tends to favor low and high frequencies. Spruce tends to have a high-frequency preference.

At one end of this scale is a wood’s natural affinity toward harmonic complexity — its tendency to resonate not only with the source note and string harmonics, but to also allow its own overtone additions to be heard. Think of rosewood’s rich voice, with its ringing overtones. At the other end is a wood’s tendency to focus more on the fundamental — basically to dampen its own overtone input, allowing only the source note and harmonics generated by the string to be heard. Think of mahogany’s dry, focused voice. One point Andy emphasizes is to avoid thinking of harmonic complexity as good and damping as bad. “The two extremes are neither good nor bad,” he says, “although depending on our own preferences as players, we can be quick to label them as such.”

This spectrum indicates the degree to which the wood is inclined to take on the character of the player and/or guitar design, versus asserting its own sonic character. This relates to the harmonic content scale mentioned above. As an example, we often describe a wood like maple as being player-reflective, which means it has a certain neutral or transparent quality that allows it to channel the player’s style or the design of the instrument more clearly. As a result, it can be more of a musical chameleon. Other woods, like rosewood, tend to have more intense character traits that will always flavor the sound, regardless of the player or instrument design.

This is pretty self-explanatory. A player will understand this as how easily and immediately the guitar responds to their touch. It can be a reflection of different factors, such as the wood’s density, strength and weight. At one end of the scale is a guitar that responds immediately to the lightest touch with an open and airy voice; at the other end is a guitar that responds well to a strong attack, producing dense and equally strong projection.

We often talk about touch sensitivity in the context of the soundboard. As an example, a cedar top is lightweight and has a high degree of touch sensitivity, which is why it often appeals to fingerstyle players with a light touch. A wood like Lutz or Adirondack spruce tends to have less touch sensitivity due to its strength and weight. It often shines in the hands of a player with a livelier attack and packs quite a sonic punch. A hardwood top like mahogany has a lower touch sensitivity, and with its natural compression, helps level out a heavier attack.

Again, remember that an acoustic guitar’s sonic personality comes from a combination of tonewoods, the body shape, the bracing architecture and other design elements, the player and other attributes. But let’s assume that the design elements, shape and player are the same across the board and just look at the way the tonewoods paired on a guitar body (the top wood together with the wood used for the back/sides) might work together. As an example, let’s take a Taylor Grand Auditorium body with a cedar top and rosewood back and sides, and walk through that pairing sonically based on those four categories.

With those elements working together, the resulting guitar will respond with a warm, harmonically rich sound that is very characteristic of itself, and respond quickly to a light touch, making this a good choice for a fingerstyle player who wants a warm-sounding guitar.

How about a Grand Auditorium body with a Lutz spruce top and mahogany back and sides?

The spruce will: 1) have a somewhat high-frequency preference; 2) with medium to high harmonic complexity; 3) be in the middle of the player- to wood-reflective scale; 4) with less touch sensitivity than cedar due to its strength and weight. The mahogany back and sides will: 1) prefer the low frequencies; 2) be very fundamental strong; 3) be substantially player- and design-reflective; 4) with a higher level of touch sensitivity. As a whole, this guitar will have a balanced frequency response, pleasing harmonic balance, tend to be player-reflective, and have a slight preference toward a stronger playing style.

In this example, using the same wood for the entire body reveals some characteristics becoming more important due to the role the wood plays. As a top, koa displays less touch sensitivity than it does as a back, due to the direct coupling with the strings. As a result, this all-koa combination produces an even string response, responding well to strumming and fingerstyle playing, with a well-balanced tonal response, offering a hint of its inherent sweetness, and reflecting some of the design, playing style and its own personality. Finally, it smooths out the player’s articulation without requiring an aggressive strumming style. And, oh yes, koa also happens to be visually gorgeous. (Let’s face it: sometimes we “hear” with our eyes too!)

As a final note, Andy acknowledges that while some players and builders are tempted to quantify the contributing role the top wood plays in producing the overall sound compared to the back and side wood, in reality, it can vary based on the woods and the design.

“I’ve heard folks say that 95 percent of an acoustic guitar’s sound comes from the top selection,” he explains. “If that were true with our guitars, you could take a spruce and maple Grand Auditorium and a spruce and rosewood Grand Auditorium, play them next to each other, and they would sound 95 percent the same. It might be just my ears, but I don’t hear them that way. I’ve long thought that not all percentages are equal, and that this last five percent is actually a lot more meaningful than the first 95 percent.”   We can’t emphasize enough that our tone chart merely paints a partial picture. But hopefully it gives you some helpful criteria for evaluating the acoustic properties of any guitar you play.

One important distinction between the materials we use is whether the tonewood is solid or layered. Solid woods produce the most complex tone, and the sound continues to improve with age. Every model in the Taylor line features a solid-wood soundboard. Our layered-wood construction (back and sides on our 200 Series and below) consists of a middle core with a thinner layer on each side. Building guitars with layered-wood backs and sides allows us to use our resources efficiently, and we’re able to arrange the layers with an alternating grain direction to increase the guitar’s stability and resilience.

Hardwoods from deciduous trees are used exclusively for the backs and sides of guitars. Acting as the supportive framework for the instrument, the back and sides contribute rigidity and stability that helps coax greater sustain from the guitar, along with physical traits that emphasize different resonant frequencies. Think of them as natural tone controls for an acoustic guitar, adding bass, midrange and treble along with varying degrees of overtones. 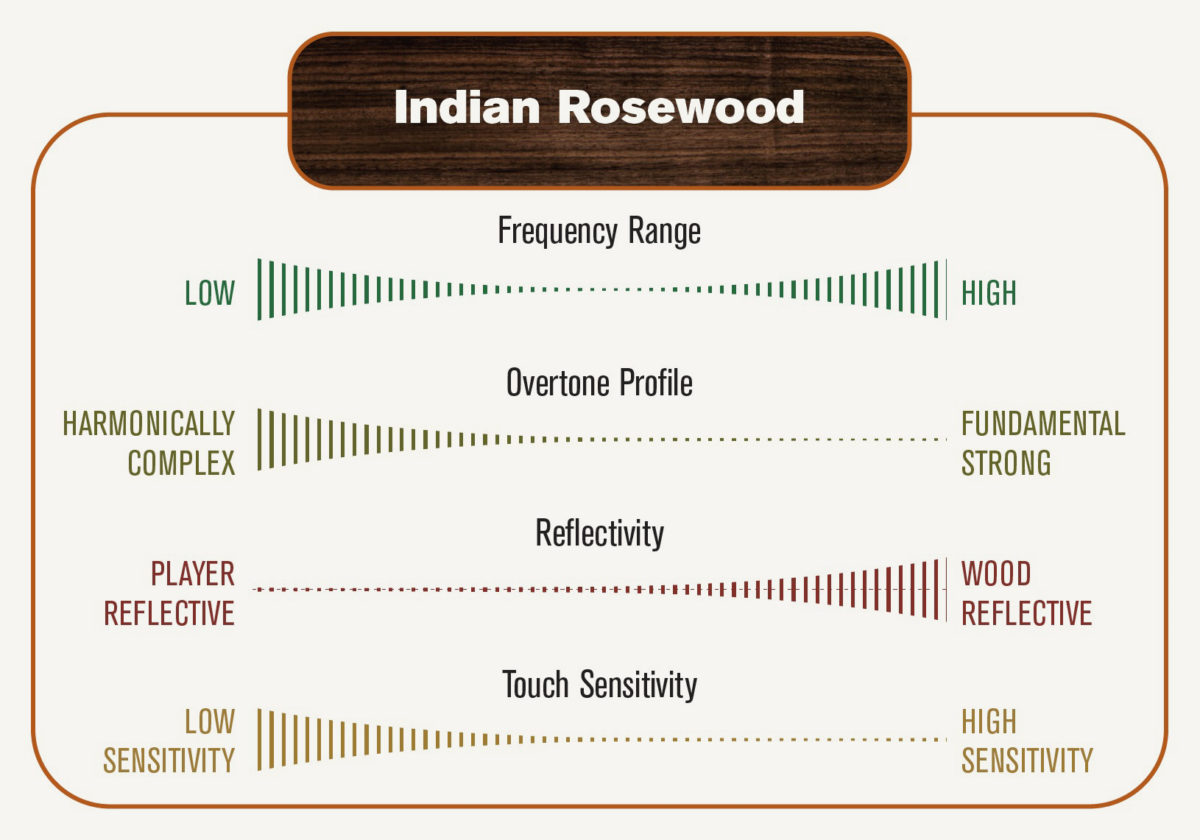 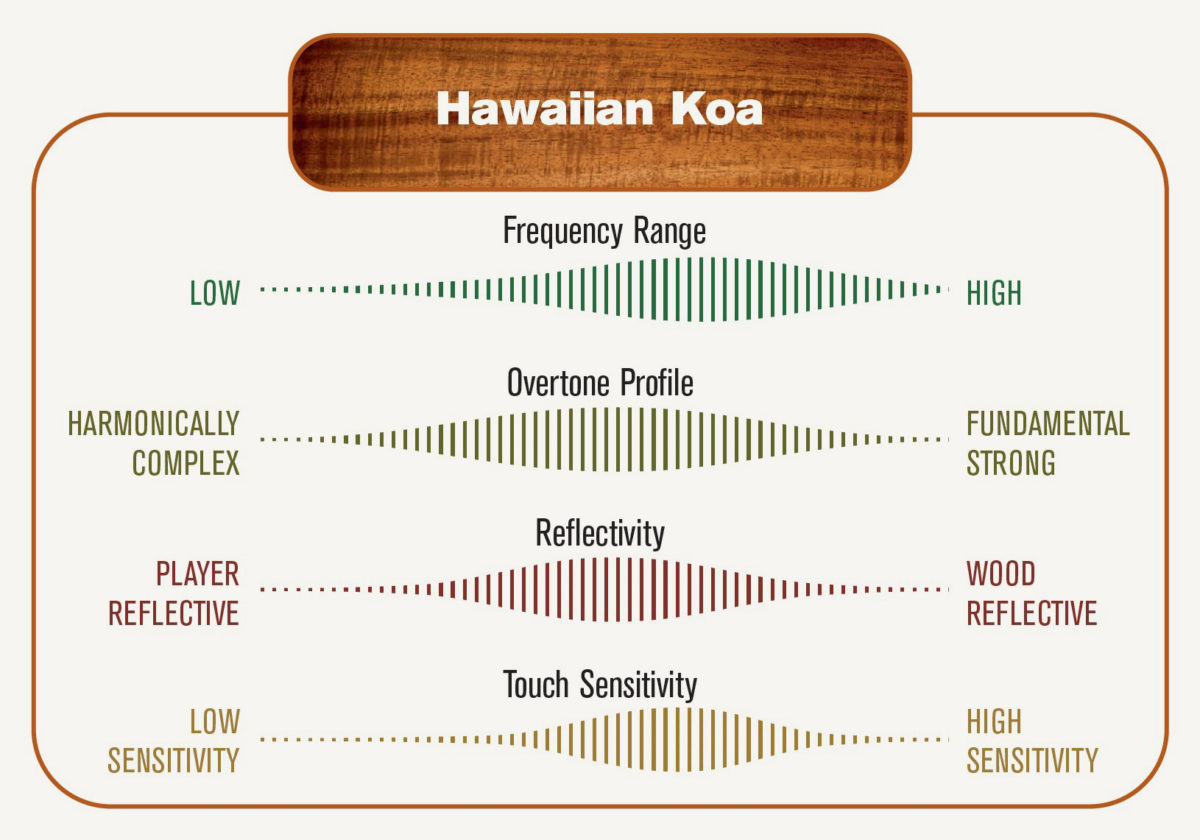 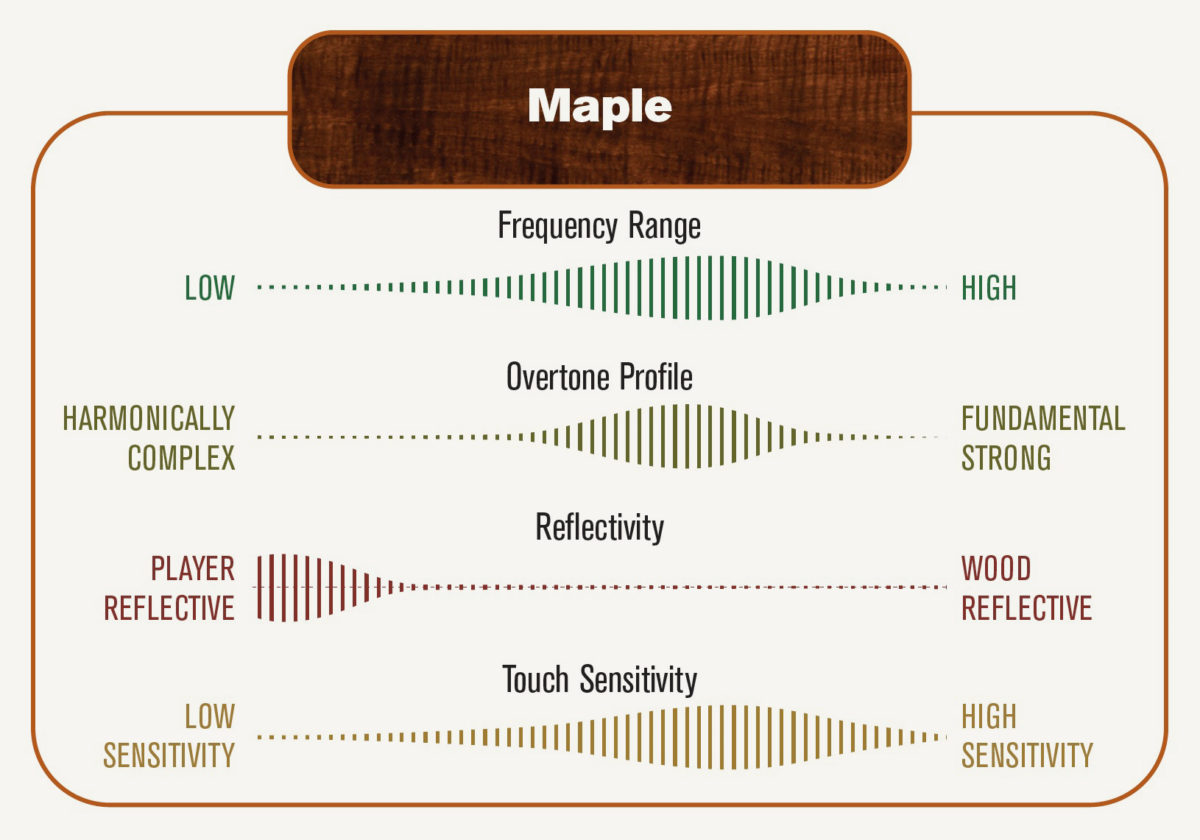 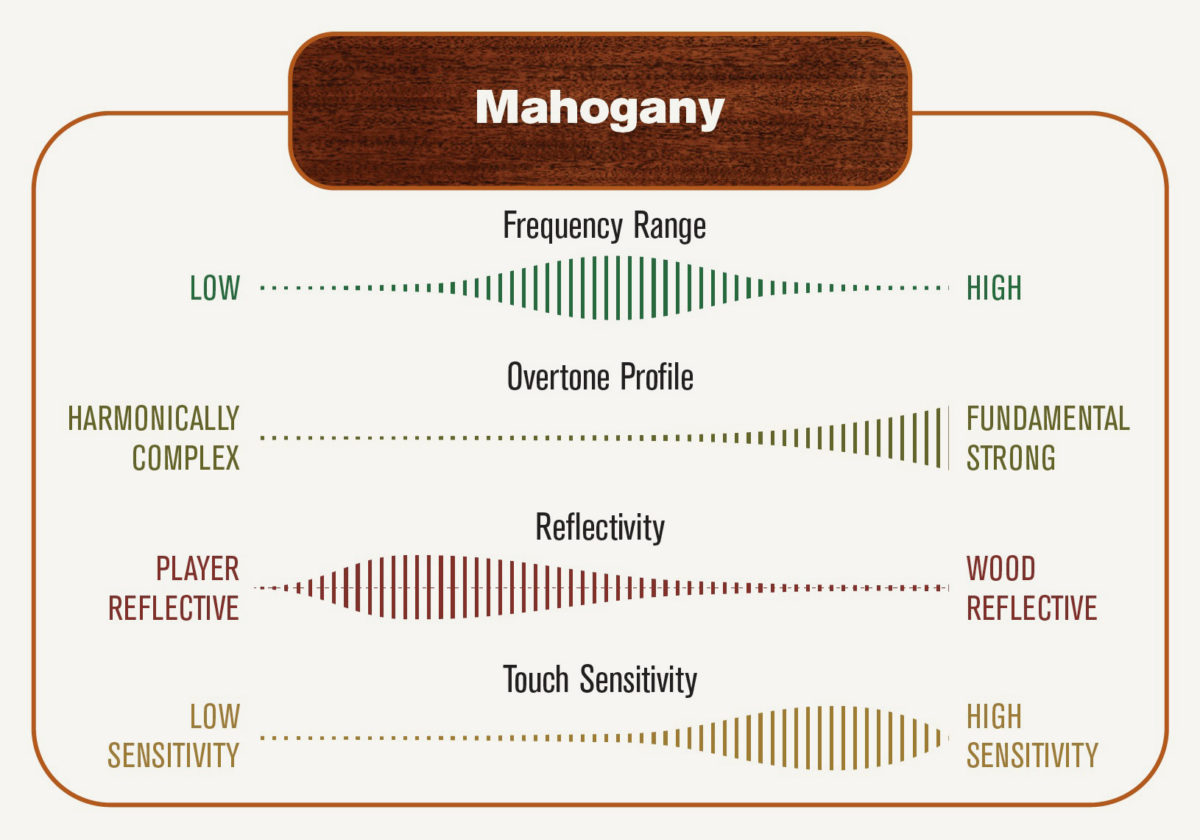 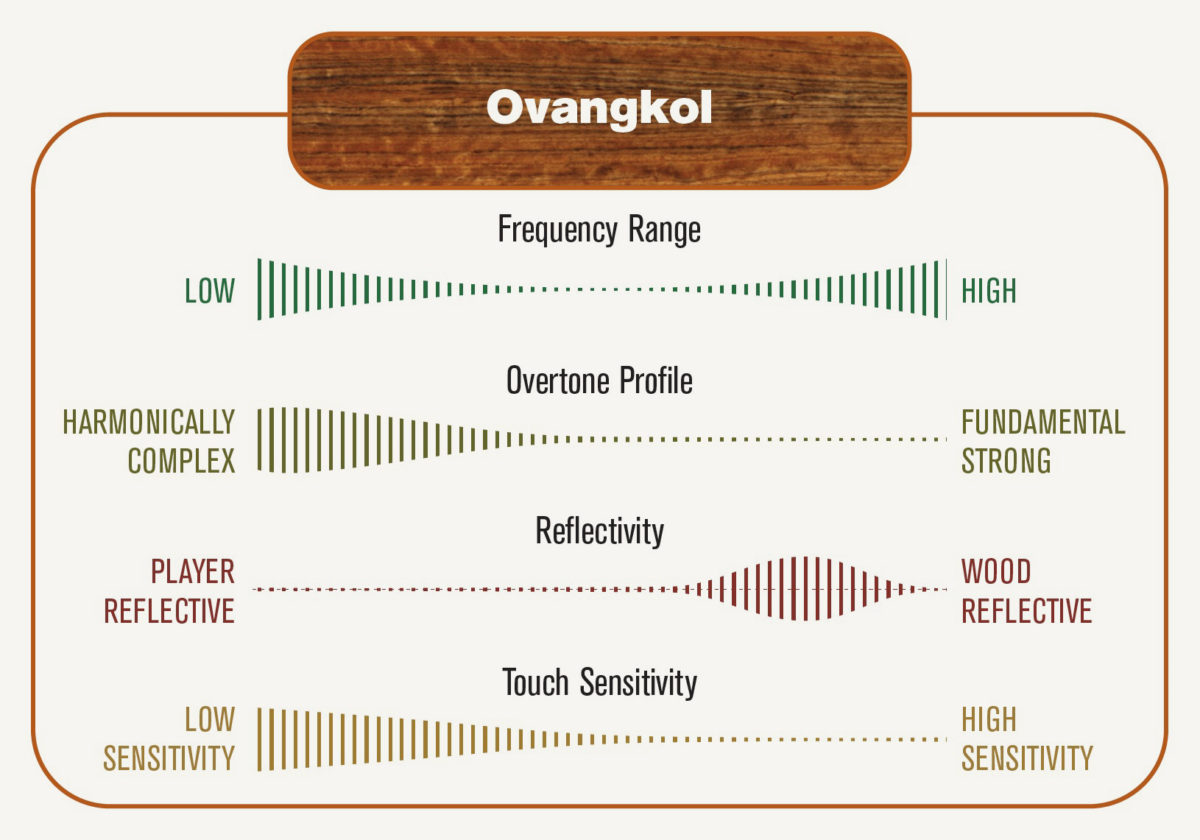 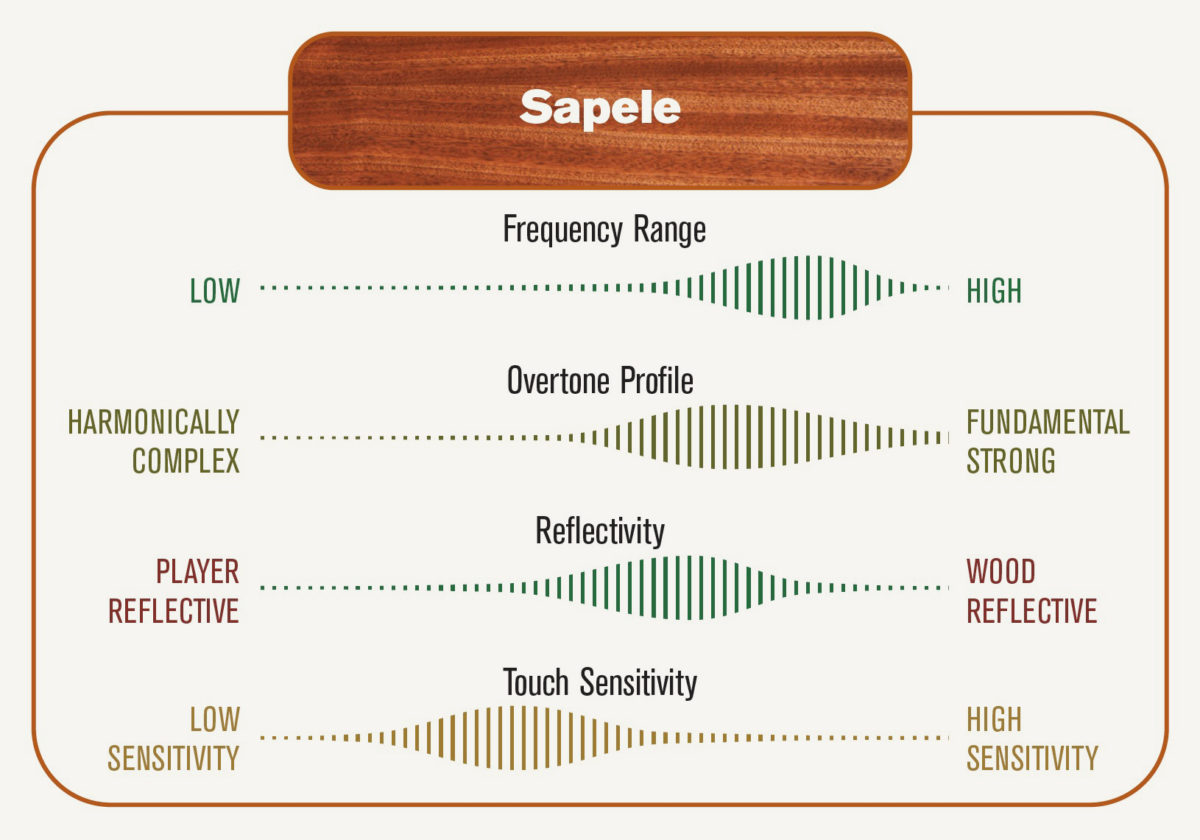 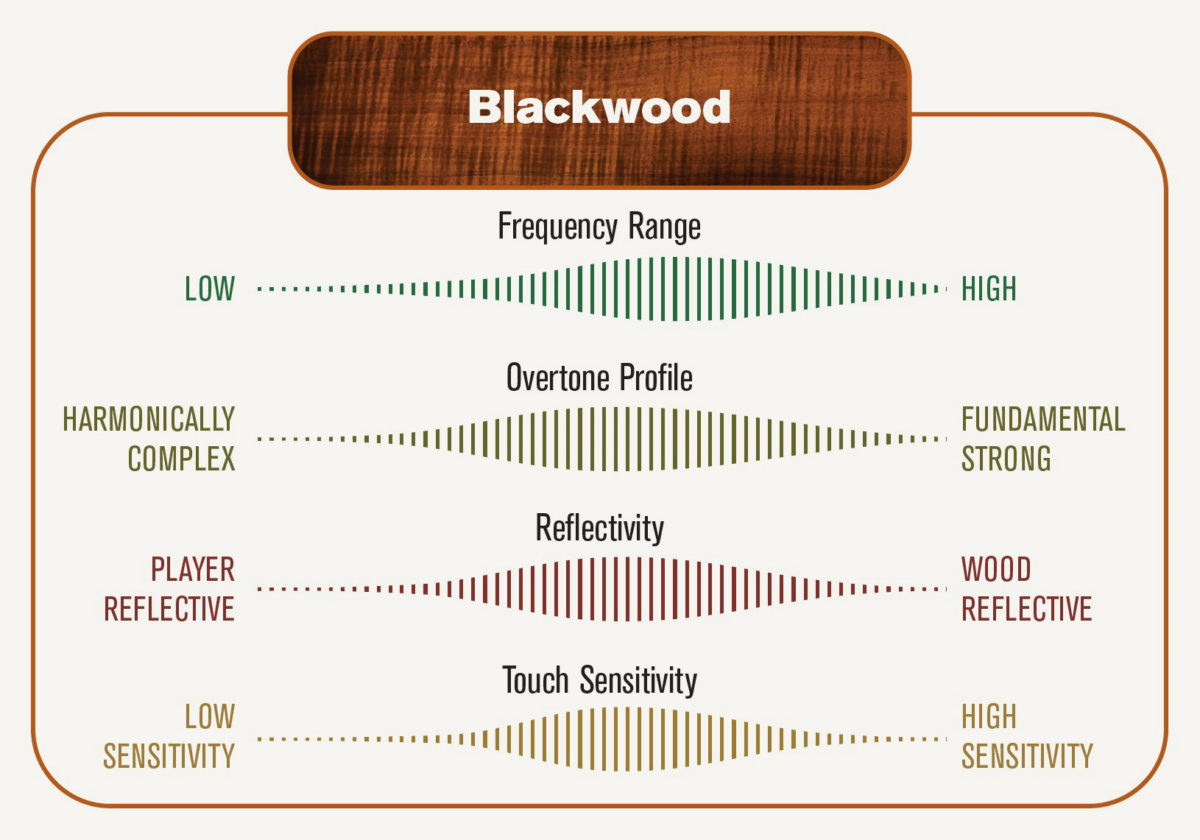 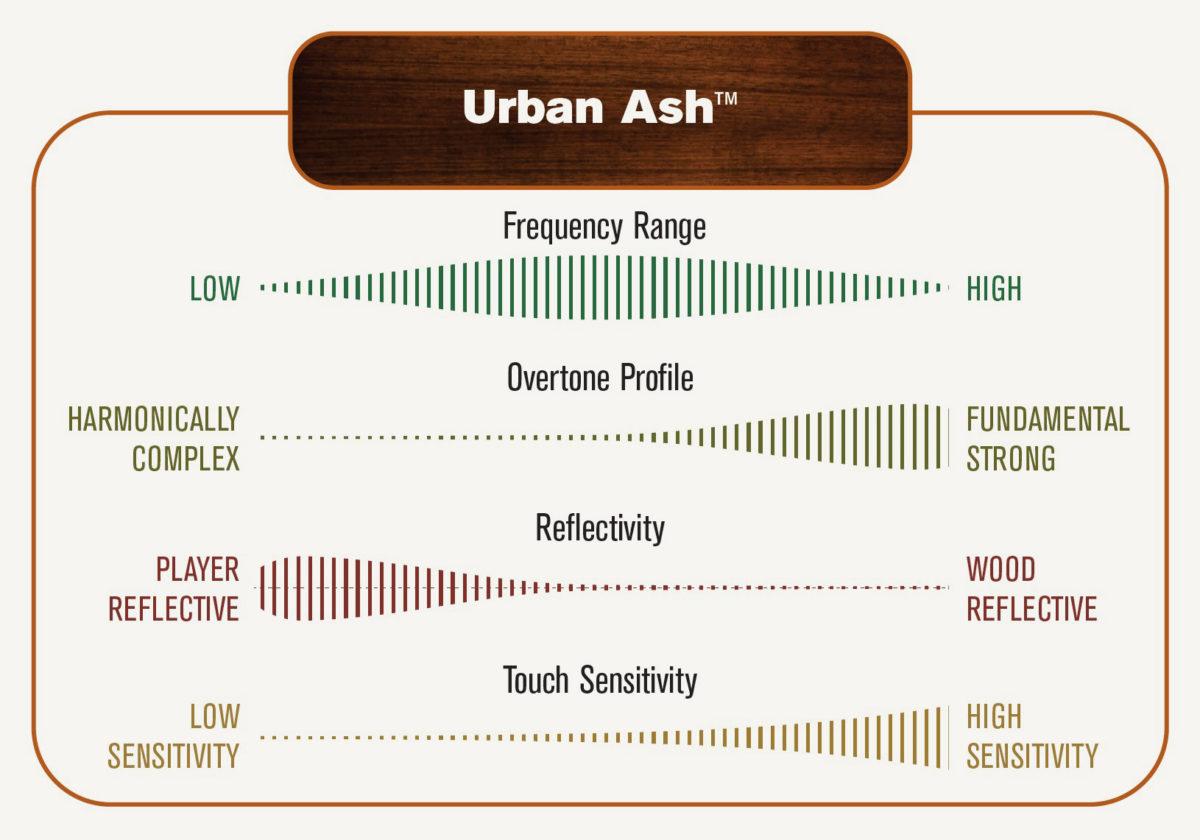 The wood used for a guitar’s soundboard plays a key role in defining the overall tone of the instrument. Typically, we use “soft” woods, which come from coniferous trees. Spruce and cedar are valued for their combination of being lightweight yet strong, possessing an elastic quality that allows them to be set in motion easily. These woods generally produce a wide dynamic range, and contribute their own unique musical flavor to the mix.

In some cases, we use hardwoods such as mahogany or Hawaiian koa as guitar tops. These denser materials require more energy to set in motion, and the vibration tends to move more gradually through them. The result is a kind of natural compression effect that rounds out the guitar’s initial attack, producing a focused voice with fewer overtones. These are ideal choices for players who frequently amplify their acoustic guitars. 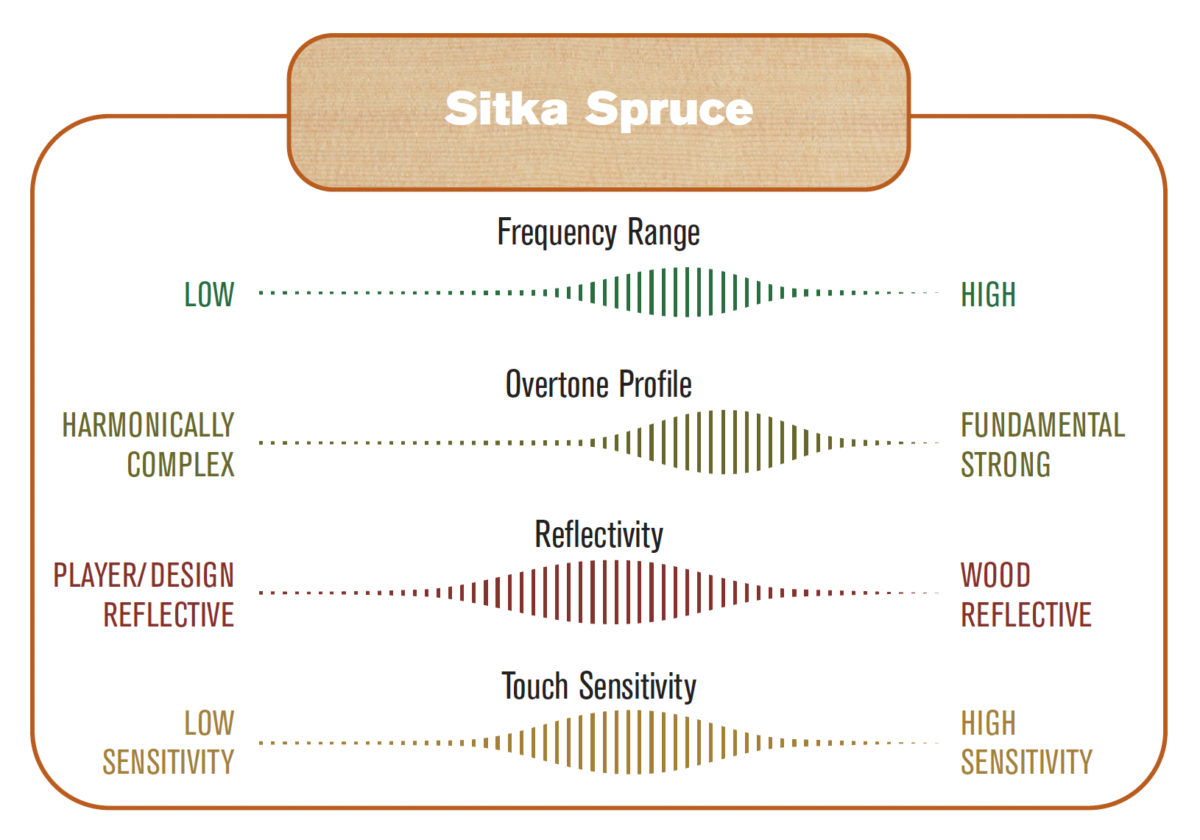 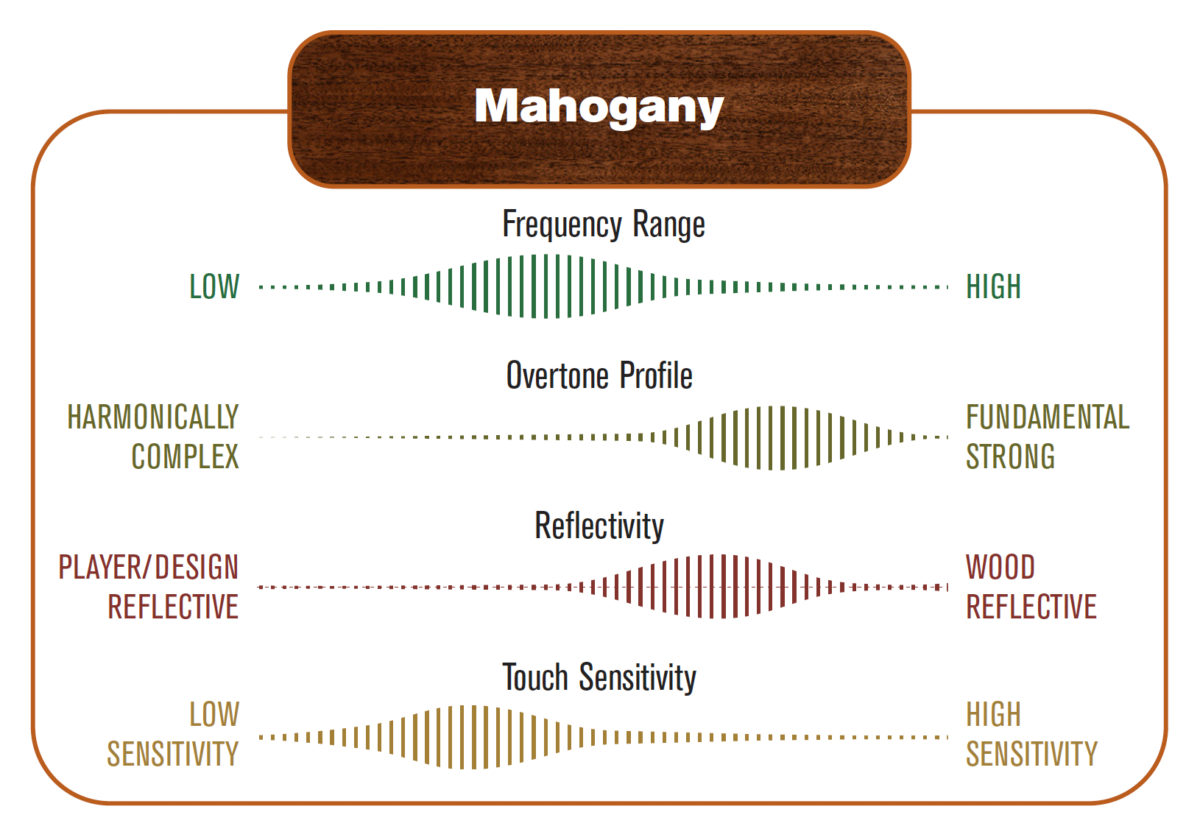 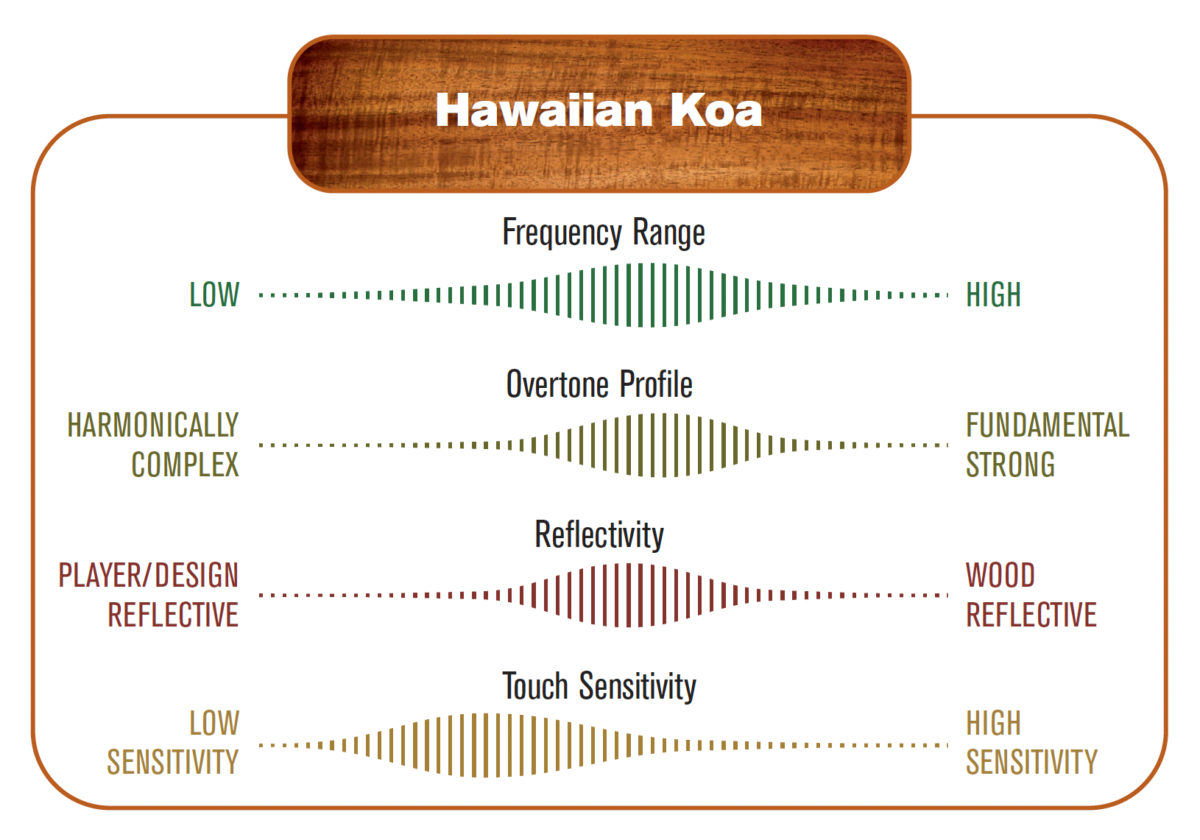 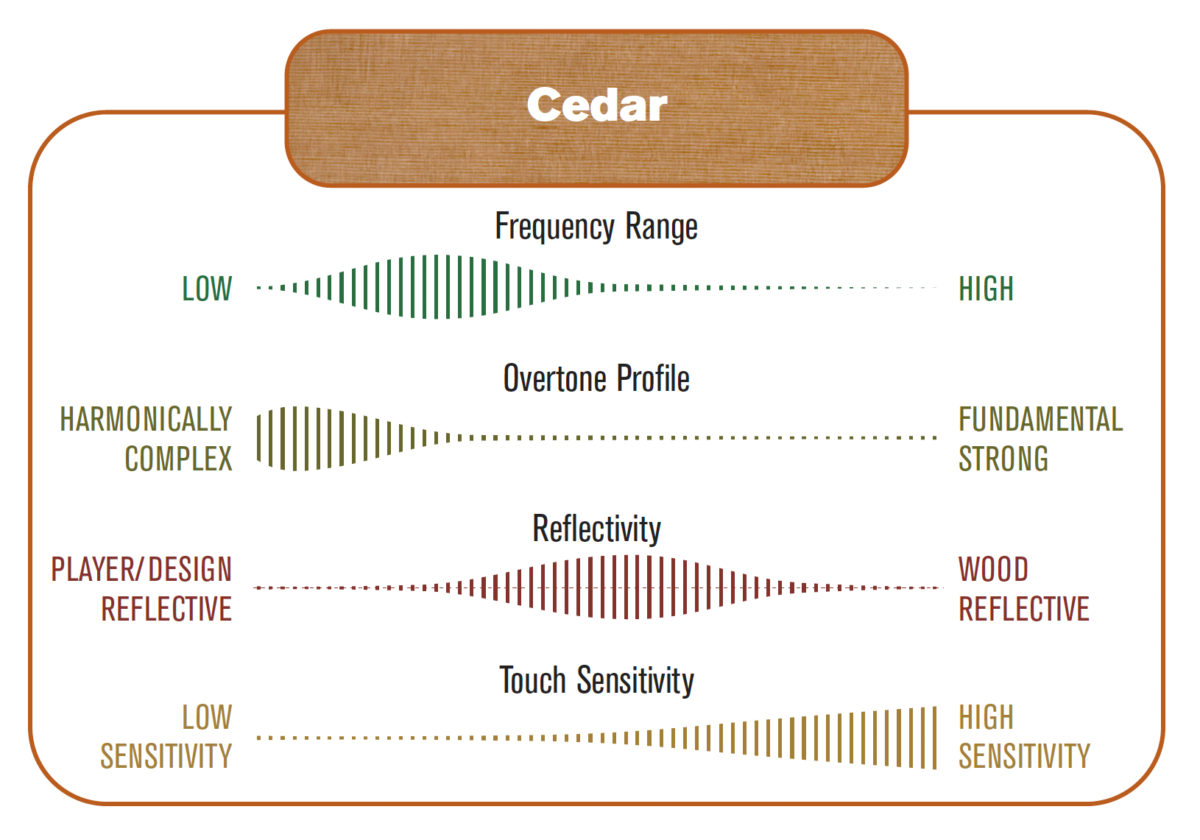